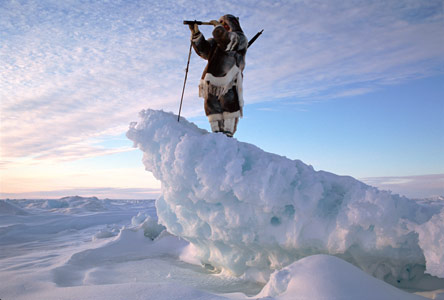 Polar bears hold a special place in the lives and culture of indigenous peoples. The Nanuq (Inuktitut; ‘polar bear’) is the king of the iqsinaqtuit, ‘those who make one frightened’; a grouping made up of polar and grizzly bears, and wolves. The Inuit have many other names for the ruler of the Arctic, including ‘the ever-wandering one’, ‘the one who walks on ice’, and ‘the great white one’.

Some indigenous Arctic communities still hunt polar bears as part of a subsistence lifestyle and long-held cultural traditions; these hunts are now carefully monitored by various regulatory agencies. The meat is eaten as part of a winter diet, and the fur is used to make kamiks (boots) and trousers. No part of the bear goes to waste (save for the liver, which is highly toxic to humans and animals).

Traditionally, the Inuit believed that every living thing had a spirit, and that their spirit stayed with their body for a time after death. After a polar bear was hunted, its body was treated with the utmost respect. Death rituals would carry on for several days, where offerings were made to the spirit of the bear. For a male bear the ceremonies would last four days, with presentations of knives, bow-drills, and other hunting tools. For a female bear the ceremonies lasted five days, and her spirit was honoured with knives, skin scrapers, and needle cases.

Legend says that hunters who respected the polar bear they had hunted would be prosperous in future hunts, and those who did not would be unsuccessful, and may even fall ill or suffer other misfortunes.

Polar bears share many traits with humans, which may be an insight into why they are so revered by indigenous peoples. A significant example of this would be a polar bears walk.

When a polar bear walks, its back paw prints overlap those made by their front paws, making it look like they’ve been walking on two feet, like a human. Actually, polar bears can indeed stand up and walk on their hind legs, and have a somewhat human silhouette when standing. Other human-like traits include walking on the soles of its feet (unlike most animals), leaving full footprints when walking, using its paws to carry food into its mouth, and sitting or leaning against something as if resting and thinking.

Polar bears exhibit several qualities that are admired by the Inuit: including their strength, patience, inquisitiveness, speed, and maternal devotion to their cubs. Inuit peoples also respect their hunting skills, with some stories stating that their ancestors learned seal hunting technique by watching polar bears. Some Inuit believe that polar bears have an intelligence matching or exceeding that of humans.

There are several Inuit legends that depict polar bears as humans in disguise, where they were bears outside of their igloo, and would shed their skin once inside.