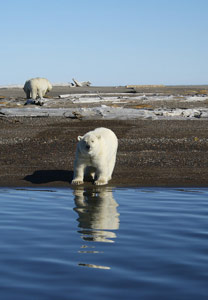 We all know that nature is pretty amazing in its diversity, and no creature proves this as much as the polar bear.  Dwelling in the coldest regions of the planet, it is nonetheless an established fact that the polar bear’s biggest problem isn’t keeping warm, it’s staying cool.  They are a creature of contradictions – the arctic animal that struggles to keep cool, the marine mammal that spends large amounts of time on land, the hibernator that is most active in winter, the ferocious and enormous predator that produces incredibly cute cubs who fit in the palm of your hand. 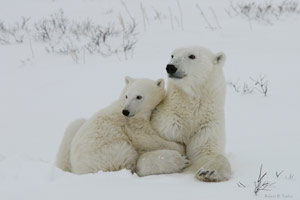 In fact, polar bears have developed an amazing number of physical attributes especially tailored to the arctic environment.  From the tips of their large feet, which act as snowshoes to carry them effortlessly over enormous snowdrifts, to the ends of every hollow, insulative hair in their luxurious fur, to the layers of blubber and fat just under their black, heat-absorbing skin, bears are so effective at retaining body heat that they cannot actually be seen by a thermal imaging camera!

So you think you know cold?  Next time you step outside to chilly fingers and a red-tipped nose in that brisk north wind; consider the polar bear, who is most at home when the barometer falls well below freezing.  In fact, polar bears are so phenomenally well adapted to cold weather that they go to all kinds of lengths to keep their turbo-heated bodies cool in the warm Arctic summer.

Yup, Mexican vacations aren’t on the cards for our Northern bear neighbours, and if you were wearing a fur coat boasting up to 10,000 hairs PER SQUARE INCH you’d probably feel the same.